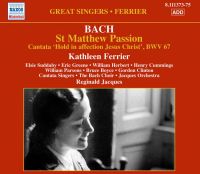 Kathleen Ferrier was one of the greatest British singers of the 20th century. Her performances of the St Matthew Passion were the stuff of legend, and she herself said, ‘You’ve never heard me sing if you haven’t heard me in Bach.’ In 1947 she began a series of sessions to record the Matthew Passion, but several factors, including a full diary of concert engagements at home and abroad, meant that the recording was not completed until June 1948. The 1949 recording of Bach’s Cantata ‘Hold in affection Jesus Christ’, BWV 67 made to mark the bicentenary of the composer’s death, here receives its first ever release on CD.