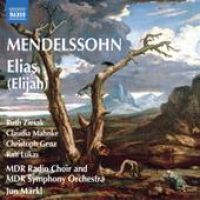 Mendelssohn’s magnificent oratorio Elijah brings to life the tumultuous times and personal drama of the Biblical prophet in a sweeping series of recitatives, arias and choruses in which the composer’s Romantic genius drew deeply from the wellsprings of Bach and Handel.

In this new recording (sung in German) Jun Märkl, one of the most notable conductors of his generation, leads an outstanding cast of soloists headed by Ralf Lukas, and Germany’s longest-standing radio symphony orchestra and its acclaimed choir.