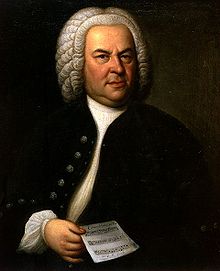 The most popular vocal score for Bach's Magnificat is shown below.

This Novello score is in English and is arranged for solo voices, SATB choir and orchestra, edited with a new translation of the four Lauds, by Neil Jenkins.

The Magnificat in D major, BWV 243, is one of the major vocal works of Johann Sebastian Bach.

It was composed for an orchestra and five voices. The text is the canticle of Mary, mother of Jesus, as recounted by Luke the Evangelist.

It is also one of the two large works Bach composed in Latin; the other being his Mass in B minor, which also shared its use of five voice parts.

Bach composed an initial version in E flat major in 1723 for the Christmas Vespers in Leipzig which contained several Christmas texts.

During the years he removed the Christmas-specific texts to make it suitable for year-round performance, as well as transposing it to D major, providing better sonority for the trumpets in particular.

The new version, which is the one usually performed, had its premiere at the Thomaskirche on July 2, 1733, the fourth Sunday after Trinity Sunday, which was the Feast of the Visitation at the time.

The work is divided into twelve parts which can be grouped into three movements, each beginning with an aria and completed by the choir in a fugal chorus. Its performance lasts approximately thirty minutes.

Please click here to hear a ChoraLine sample for Magnificat