Hector Berlioz (1803-1869) was a French composer of orchestral and choral music, whose style sits squarely in the Romantic tradition.

BERLIOZ- Please click here for all items we stock 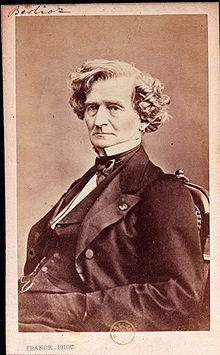 The five movement Symphonie fantastique, partly due to its fame, is considered by most to be his most outstanding work, and the work had a considerable impact when first performe

d in 1830, but 3 years after the death of Beethoven and 2 years after that of Schubert. It is famous for its innovations in the form of the programmatic symph

ony. The somewhat bizarre story behind this work relates to Berlioz himself and can be considered in many ways autobiographical - Berlioz's curious obsession with the actress Harriet Smithson is well-known as the inspiration for the piece.


In addition to the Symphonie fantastique, some other orchestral works of Berlioz currently in the standard orchestral repertoire include his "légende dramatique" La damnati

on de Faust and "symphonie dramatique" Roméo et Juliette (both large-scale works for mixed voices and orchestra), and his concertante symphon

The unconventional music of Berlioz irritated the established concert and opera scene. Berlioz often had to arrange for his own performances as well as pay for them himself. This too

k a heavy toll on him financially and emotionally. The nature of his large works - sometimes involving hundreds of performers - made financial success difficult. His journalistic abilities became essential for him to make a living and he survived as a witty critic, emphasizing the importance of drama and expressive

ness in musical entertainment. It was perhaps this expense which prevented Berlioz from composing more opera than he did. His talent in the genre is obvious, but opera is the most expensive of all classical forms, and Berlioz in particular struggled to arrange stagings of his operas, due in part to the unwillingness of conservative Paris opera companies to perform his work.

While Berlioz is best known as a composer, he was also a prolific writer, and supported himself for many years by writing musical criticism, utilising a bold, vigorous style, at times imperious and sarcastic. He wrote for many journals, including the Rénovateur, Journal des débats and Gazette musicale. He was active in the Débats for over thirty years until submitting his last signed article in 1863. Almost from the founding, Berlioz was a key member of the editorial board of the Gazette as well as a contributor, and acted as editor on several occasions while the owner was otherwise engaged. Berlioz took full advantage of his times as editor, allowing himself to increase his articles written on music history rather than current events, evidenced by him publishing seven articles on Gluck in the Gazette between June 1834 and January 1835. An example of the amount of work he produced is indicated in his producing over one-hundred articles for the Gazette between 1833 and 1837. This is a conservative estimate, as not all of his submissions were signed. In 1835 alone, due to one of his many times of financial difficulty, he wrote four articles for the Monde dramatique, twelve for the Gazette, nineteen for the Débats and thirty-seven for the Rénovateur. These were not mere scribbles, but in-depth articles and reviews with little duplication, which took considerable time to write.

Another noteworthy indicator of the importance Berlioz placed on journalistic integrity and even-handedness were the journals which he both did and did not write for. During the middle of the 1830s the Gazette was considered an intellectual journal, strongly supporting the progressive arts and Romanticism in general, and opposing anything which it considers as debasing this. Exemplified in its long-standing criticism of Henri Herz, and his seemingly endless stream of variations on opera themes, but to its credit, it also positively reviewed his music on occasion. Its writers included Alexandre Dumas, Honoré de Balzac and George Sand. The Gazette wasn't even unanimous in its praise of Berlioz's music, although it always recognised him as an important and serious composer to be respected. An example of another journal of the same time is the Revue musicale, which thrived on personal attacks, many against Berlioz himself from the pen of critic François-Joseph Fétis. At one point, Robert Schumann was motivated to publish a detailed rebuttal of one of Fétis' attacks on Berlioz's Symphonie fantastique in his own Neue Zeitschrift für Musik journal. Fétis would later contribute to the debasement of the reputation of the Gazette when his journal failed and was absorbed by the Gazette, he found himself on the editorial board.

The books which Berlioz has become acclaimed for were compiled from his journal articles. Les soirées de l’orchestre (Evenings with the Orchestra) (1852), a scathing satire of provincial musical life in 19th century France, and the Treatise on Instrumentation, a pedagogic work, were both serialised originally in the Gazette musicale. Many parts of the Mémoires (1870) were originally published in the Journal des débats, as well as Le monde illustré. The Mémoires paint a magisterial (if biased) portrait of the Romantic era through the eyes of one of its chief protagonists. Evenings with the Orchestra is more overtly fictional than his other two major books, but its basis in reality is its strength, making the stories it recounts all the funnier due to the ring of truth. W. H. Auden praises it, saying "To succeed in [writing these tales], as Berlioz most brilliantly does, requires a combination of qualities which is very rare, the many-faceted curiosity of the dramatist with the aggressively personal vision of the lyric poet." The Treatise established his reputation as a master of orchestration. The work was closely studied by Gustav Mahler and Richard Strauss and served as the foundation for a subsequent textbook by Nikolai Rimsky-Korsakov who as a music student attended the concerts Berlioz conducted in Moscow and Saint Petersburg.

(Article based on Wikipedia entry for Berlioz)

Click here to view all items related to Berlioz.