Vocal Scores for Handel Messiah
Messiah (HWV 56) is an English oratorio composed by George Frideric Handel which became one of the most popular works in Western choral literature.

The two most popular vocal scores for Handel's Messiah are shown below.

The Prout Edition of Handel's Messiah score is in English for SATB and chorus. 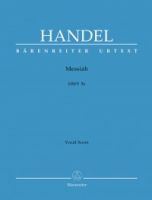 Messiah (HWV 56) is an English oratorio composed by George Frideric Handel, and is one of the most popular works in the Western choral literature. The libretto by Charles Jennens is drawn entirely from the King James and Great Bibles, and interprets the Christian doctrine of the Messiah. Messiah, often incorrectly called "The Messiah", is one of Handel's most famous works. v

Composed in London during the summer of 1741 and premiered in Dublin, Ireland on 13 April 1742, it was repeatedly revised by Handel, reaching its most familiar version in the performance to benefit the Foundling Hospital in 1754. In 1789 Mozart orchestrated a German version of the work; his added woodwind parts, and the edition by Ebenezer Prout, were commonly heard until the mid-20th century and the rise of historically informed performance. It has subsequently received "updatings" at the hands of many other composers, conductors and arrangers including Malcolm Sargent and Eugene Goossens, whose arrangement of the piece stops only just short of including the kitchen sink. During the Victorian era, in particular, performances by vast and ungainly forces were commonplace and assumed to be historically accurate.

The Messiah sing-alongs now common at Christmas often consist of only the first of the oratorio's three parts, with the Hallelujah Chorus (originally concluding the second part) replacing His Yoke is Easy in the first part.

Messiah presents an interpretation of the Christian view of the Messiah, or "the anointed one" as Jesus the Christ. Divided into three parts, the libretto covers the prophecies concerning the Christ, the birth, miracles, Crucifixion, Resurrection and Ascension of Jesus, and finally the End Times with the Christ's final victory over death and sin.

Although the work was conceived for secular theatre and first performed during Lent, it has become common practice since Handel's death to perform Messiah during Advent, the preparatory period of the Christmas season, rather than in Lent or at Easter. Messiah is often performed in churches as well as in concert halls. Christmas concerts often feature only the first section of Messiah plus the "Hallelujah" chorus, although some ensembles feature the entire work as a Christmas concert. The work is also heard at Eastertide, and selections containing Resurrection themes are often included in Easter services.

The world record for an unbroken sequence of annual performances of the work by the same organisation is held by the Royal Melbourne Philharmonic, in Melbourne, Australia, which has performed Messiah at least once annually for 157 years, starting in its foundation year of 1853.

The work is divided into three parts which address specific events in the life of Christ. Part One is primarily concerned with the Advent and Christmas stories. Part Two chronicles Christ's Passion, Resurrection, Ascension, and the proclamation to the world of the Christian message. Part Three is based primarily upon the events chronicled in the Book of Revelation. Although Messiah deals with the New Testament story of Christ's life, a majority of the texts used to tell the story were selected from the Old Testament prophetic books of Isaiah, Haggai, Malachi, and others.

The soprano aria "I know that my Redeemer liveth" is frequently heard at Christian funerals. It is believed that parts of this aria have been the basis of the composition of the Westminster Quarters. Above Handel's grave in Westminster Abbey is a monument (1762) where the musician's statue holds the musical score of the same aria. This aria was also forcibly inserted into another choral masterpiece, Brahms' German Requiem, at its premiere by religious authorities keen to counter that piece's perceived secular slant with something unmistakably Christian.

(Article based on Wikipedia entry for Messiah)

Please click here to hear a ChoraLine sample for Messiah