The oratorio of "Samson" was written in 1741 and first sung in 1743 at Covent Garden.
The  most popular vocal scores for Handel's Samson are shown below.
Rehearsal recordings to help learn your voice part (Soprano, Alto, Tenor, Bass) are described below.
Full video version to hear the work in full is also below.

The Barenreiter edition of Handel's Samson is for choir. 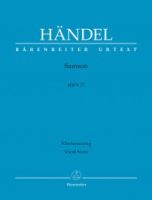 The Novello edition of Handel's Samson is in English for SATB and solo.

The oratorio of "Samson" was written in 1741. The last chorus was dated October 29; but in the following year Handel added to it "Let the bright Seraphim" and the chorus, "Let their celestial Concerts." The oratorio was first sung at Covent Garden, February 18, 1743.

The characters introduced are Samson; Micah, his friend; Manoah, his father; Delilah, his wife; Harapha, a giant of Gath; Israelitish woman; priest of Dagon; virgins attendant upon Delilah; Israelites, friends of Samson; Israelitish virgins; and Philistines.

After a brilliant overture the scene opens before the prison in Gaza, with Samson blind and in chains. His opening recitative, setting forth his release from toil on account of the feast of the Dagon, introduces a brilliant and effective chorus by the priest with trumpets ("Awake the Trumpet's lofty Sound"), after which a Philistine woman in a bright, playful melody invites the men of Gaza to bring "The merry Pipe and pleasing String" ; whereupon the trumpet chorus is repeated. After the tenor aria ("Loud is the Thunder's awful Voice"), the chorus recurs again, showing Handel's evident partiality for it.

The Philistine woman has another solo ("Then free from Sorrow"), whereupon in a pathetic song ("Torments, alas!") Samson bewails his piteous condition. His friend Micah appears, and in the aria ("Oh, Mirror of our fickle State") condoles with him. In answer to his questions, "Which shall we first bewail, thy Bondage, or lost Sight?" Samson replies in a short, but exquisitely tender aria ("Total Eclipse: no Sun, no Moon, all dark amidst the Blaze of Noon") -- a song brought tears to his eyes of the blind Handel himself when he listened to it long afterwards.

The next chorus ("Oh, first-created Beam") is of more than ordinary interest, as it treats the same subject which Haydn afterwards used in "The Creation." It begins in a soft and quiet manner, in ordinary time, develops into a strong Allegro on the words ("Let there be Light"), and closes with a spirited fugue on the words ("To Thy dark Servant Life by Light afford"). A dialogue follows between Manoah and Micah, leading up to an intricate bravura aria for bass ("Thy glorious Deeds inspired my Tongue"), closing with an exquisite slow movement in broad contrast to its first part.

Through comforted by his friends, Samson breaks out in furious denunciation of his enemies in the powerfully dramatic aria ("Why does the God of Israel sleep?"). It is followed up in the same spirit by the chorus ("Then shall they know") -- a fugue on two vigorous subjects, the first given out by the altos, and the second by the tenors. Samson's wrath subsides in the recitative ("My genial Spirits droop"), and the first act closes with the beautifully constructed chorus ("Then round about the starry Throne"), in which his friends console him with the joys he will find in another life.

The second part, after a recitative, opens, with an aria by Manoah ("Just are the Ways of God to Man"), in which he conjures Samson to repose his trust in God. It is followed by the beautiful prayer of Micah ("Return, return, O God of Host"), emphasized by the chorus to which it leads ("To dust his Glory they would tread"), with which the prayer is interwoven in obligato form. From this point, as Delilah appears, the music is full of bright color, and loses its sombre tone. In a short recitative she excuses her misdeed, and then breaks out in an aria of sensous sweetness ("With plaintive Notes and am'rous Moan, thus coos the Turtle left alone").

Her bewitching grace, however, makes little impression upon Samson, who replies with the aria ("Your Charms to Ruin led the Way"). In another enticing melody ("My Faith and Truth, O Samson, prove"), she seeks to induce him to return to her house, and a chorus of virgins add their entreaties. A last effort is made in the tasteful and elegant aria ("To fleting Pleasures make your Court") ; but when that also fails, Delilah reveals her true self. Samson rebukes "her warbling charms," her "trains and wiles," and counts "this prison-house the house of liberty to thine" ; whereupon a highly characteristic duet ensues ("Traitor to Love").

An aria for Micah follows ("It is nor Virtue, Valor, Wit"), leading up to a powerful dissertation on masculine supremacy in a fugued chorus which is treated in a spirited manner. The giant Harapha now appears, and mocks Samson with the taunt that had met him before he was blind, he would have left him dead on the field of death, "where thou wrought'st Wonders with an Ass' Jaw." His first number ("Honor and Arms scorn such a Foe") is one of the most spirited and dashing bass solos ever written. Samson replies with the majestic aria ("My Strength is from the living God"). The two solos reach their climax in the energetic duet between the giants ("Go, baffled Coward, go").

Micah then suggests to Harapha that he shall call upon Dagon to dissolve "those magic Spells that gave our Hero Strength," as a test of his power. The recitative is followed by an impressive six-part chorus ("Hear, Jacob's God") in the true church style. Its smooth , quiet flow of harmony in refreshing as compared with the tumult of the giants' music preceedes, and the sensousness of the chorus ("To Song and Dance we give the Day") which follows it. The act closes with the massive double chorus ("Fixed in His everlasting Seat") in which the Israelites and Philistines celebrate the attributes of their respective deities and invoke their protection, and in which also the composer brings out with overwhelming effect the majesty and grandeur of God as compared with the nothingness of Dagon.

The third part opens with a dialogue in which Harapha brings the message to Samson that he must repair to the feast of Dagon to delight the Philistines with some of his feats of strength. Upon Samson's refusal, Harapha sings the threatening aria ("Presuming Slave!"). The Israelites invoke the protection of God in the spirited chorus ("With Thunder armed"), closing with a prayer which changes to wild and supplicating entreaty.

Samson at last yields in a tender, pathetic aria ("Thus when the Sun"), which seems to anticipate his fate. In a song of solemn parting ("The Holy One of Israel be thy Guide"), accompanied by the chorus ("To Fame immortal go"), his friends bid him farewell. The festivities begin, and in an exultant chorus ("Great Dagon has subdued our Foe") the Philistines are heard exulting over Samson's discomfiture. Micah and Manoah, hearing the sounds, are filled with anxiety, and the latter expresses his solicitude in the tender aria ("How willing my paternal Love").

But the scene suddenly changes. In a short, crashing presto the coming destruction is anticipated. The trembling Israelites express their alarm in the chorus ("Hear us, our God"), and appeal to heaven for protection. A messenger rushes upon the scene and announces that Samson is dead and has involved the destruction of his enemies in the general calamity. Micah gives expression to his grief in the touching aria ("Ye sons of Israel, now lament"), followed by the Israelites in a sorrowful wail ("Weep, Israel, weep"). A funeral march, in the major key, intervenes, full of tender expression of sorrow -- for which, after the first two representations, Handel substituted the Dead March from "Saul," and both marches are now printed in the scores for general use.

As at first written, the oratorio closed with the effective chorus and solo ("Bring the Laurels"); but a year afterwards Handel made a diffrent ending. Manoah calls upon the people to cease their lamentations, and the funeral pageant is followed by the magnificent trumpet aria ("Let the bright seraphim") -- a song worthy only of the greatest artist, characterized by joyousness, brilliance and lofty inspiration, both with voice and instrument -- and the equally magnificent chorus ("Let their celestial Concerts"), which closes the great oratorio with triumphant exultation.

Please click here to hear a ChoraLine sample for Samson