Franz Joseph Haydn (31 March 1732 – 31 May 1809), known as Joseph Haydn, was an Austrian composer, one of the most prolific and prominent composers of the classical period. He is often called the "Father of the Symphony" and "Father of the String Quartet" because of his important contributions to these genres. He was also instrumental in the development of the piano trio and in the evolution of sonata form. 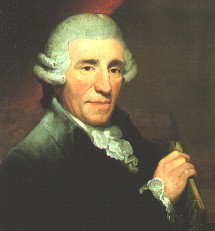 Franz Joseph Haydn (31 March 1732 – 31 May 1809), known as Joseph Haydn, was an Austrian composer, one of the most prolific and prominent composers of the classical period. He is often called the "Father of the Symphony" and "Father of the String Quartet" because of his important contributions to these genres. He was also instrumental in the development of the piano trio and in the evolution of sonata form.

A life-long resident of Austria, Haydn spent much of his career as a court musician for the wealthy Hungarian aristocratic Esterházy family on their remote estate. Isolated from other composers and trends in music until the later part of his long life, he was, as he put it, "forced to become original". At the time of his death, he was one of the most celebrated composers in Europe.

Joseph Haydn was the brother of Michael Haydn, himself a highly regarded composer, and Johann Evangelist Haydn, a tenor. He was also a close friend of Wolfgang Amadeus Mozart and a teacher of Ludwig van Beethoven.

A central characteristic of Haydn's music is the development of larger structures out of very short, simple musical motifs, often derived from standard accompanying figures. The music is often quite formally concentrated, and the important musical events of a movement can unfold rather quickly.

Haydn's work was central to the development of what came to be called sonata form. His practice, however, differed in some ways from that of Mozart and Beethoven, his younger contemporaries who likewise excelled in this form of composition. Haydn was particularly fond of the so-called "monothematic exposition", in which the music that establishes the dominant key is similar or identical to the opening theme. Haydn also differs from Mozart and Beethoven in his recapitulation sections, where he often rearranges the order of themes compared to the exposition and uses extensive thematic development.

Haydn's formal inventiveness also led him to integrate the fugue into the classical style and to enrich the rondo form with more cohesive tonal logic (see sonata rondo form). Haydn was also the principal exponent of the double variation form—variations on two alternating themes, which are often major- and minor-mode versions of each other.

Perhaps more than any other composer's, Haydn's music is known for its humor. The most famous example is the sudden loud chord in the slow movement of his "Surprise" symphony; Haydn's many other musical jokes include numerous false endings (e.g., in the quartets Op. 33 No. 2 and Op. 50 No. 3), and the remarkable rhythmic illusion placed in the trio section of the third movement of Op. 50 No. 1.

Much of the music was written to please and delight a prince, and its emotional tone is correspondingly upbeat. This tone also reflects, perhaps, Haydn's fundamentally healthy and well-balanced personality. Occasional minor-key works, often deadly serious in character, form striking exceptions to the general rule. Haydn's fast movements tend to be rhythmically propulsive and often impart a great sense of energy, especially in the finales. Some characteristic examples of Haydn's "rollicking" finale type are found in the "London" symphony No. 104, the string quartet Op. 50 No. 1, and the piano trio Hob XV: 27. Haydn's early slow movements are usually not too slow in tempo, relaxed, and reflective. Later on, the emotional range of the slow movements increases, notably in the deeply felt slow movements of the quartets Op. 76 Nos. 3 and 5, Symphony No. 98, Symphony No. 102, and piano trio Hob XV: 23. The minuets tend to have a strong downbeat and a clearly popular character. As early as Op. 33 (1781) Haydn turned some of his minuets into "scherzi" which are much faster, at one beat to the bar.

(Article based on Wikipedia entry for Josef Haydn)

Click here to view all items related to Haydn.