Claudio Giovanni Antonio Monteverdi (15 May 1567 (baptized) – 29 November 1643) was an Italian composer, gambist, singer, and Catholic priest. Monteverdi is considered a crucial transitional figure between the Renaissance and the Baroque periods of music history. While he worked extensively in the tradition of earlier Renaissance polyphony, such as in his madrigals, he also made great developments in form and melody and began employing the basso continuo technique, distinctive of the Baroque. Monteverdi wrote one of the earliest operas, L'Orfeo, which is the earliest surviving opera still regularly performed. 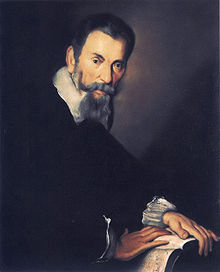 Claudio Monteverdi was born in 1567 in Cremona, a town in Northern Italy. His father was Baldassare Monteverdi, a doctor, apothecary and surgeon. He was the oldest of five children. During his childhood, he was taught by Marc'Antonio Ingegneri, the maestro di cappella (The Maestro di capella’s job was to conduct important worship services in accordance with the liturgy books of the Roman Catholic Church). at the Cathedral of Cremona. Monteverdi learned about music by being part of the cathedral choir. He also studied at the University of Cremona. His first music was written for publication, including some motets and sacred madrigals, in 1582 and 1583. His first five compositions were: Cantiunculae Sacrae, 1582; Madrigal Spirituali, 1583; the three-part canzonets, 1584; and the five-part madrigals– Book I, 1587, and Book II, 1590. By 1587, he had produced his first book of secular madrigals. Monteverdi worked for the court of Mantua first as a singer and violist, then as music director. He worked at the court of Vincenzo I of Gonzaga in Mantua as a vocalist and viol player. In 1602, he was working as the court conductor.

In 1599 Monteverdi married the court singer Claudia Cattaneo, who died in September 1607. He and his wife had two boys (Francesco and Massimilino) and one girl (Leonora - another daughter died shortly after birth).

By 1613, he had moved to the San Marco in Venice where, as conductor, he quickly restored the musical standard of both the choir and the instrumentalists. The musical standard had declined due to the financial mismanagement of his predecessor, Giulio Cesare Martinengo. The managers of the basilica were relieved to have such a distinguished musician in charge, as the music had been declining since the death of Giovanni Croce in 1609.

In 1632, he became a priest. During the last years of his life, when he was often ill, he composed his two last masterpieces: Il ritorno d'Ulisse in patria (The Return of Ulysses, 1641), and the historic opera L'incoronazione di Poppea (The Coronation of Poppea, 1642), based on the life of the Roman emperor Nero. L'incoronazione especially is considered a culminating point of Monteverdi's work. It contains tragic, romantic, and comedic scenes (a new development in opera), a more realistic portrayal of the characters, and warmer melodies than previously heard. It requires a smaller orchestra, and has a less prominent role for the choir. For a long period of time, Monteverdi's operas were merely regarded as a historical or musical interest. Since the 1960s, The Coronation of Poppea has re-entered the repertoire of major opera companies worldwide.

Monteverdi died in Venice on 29 November 1643 and was buried at the church of the Frari.

Monteverdi's first church music publication was the archaic Mass In illo tempore to which the Vesper Psalms of 1610 were added. The Vesper Psalms of 1610 are also one of the best examples of early repetition and contrast, with many of the parts having a clear ritornello. The published work is on a very grand scale and there has been some controversy as to whether all the movements were intended to be performed in a single service. However, there are various indications of internal unity. In its scope, it foreshadows such summits of Baroque music as Handel's Messiah, and J.S. Bach's St Matthew Passion. Each part (there are twenty-five in total) is fully developed in both a musical and dramatic sense - the instrumental textures are used to precise dramatic and emotional effect, in a way that had not been seen before.

Click here to view all items related to Monteverdi.