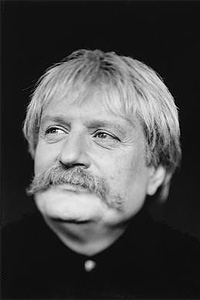 Stabat Mater is a 2008 piece by Welsh composer Karl Jenkins, and is based on the 13th century Roman Catholic prayer, the Stabat Mater.  Like much of Jenkins' earlier work, the piece incorporates both traditional Western music (orchestra and choir) with ethnic instruments and vocals.

The most popular vocal score for Jenkins' Stabat Mater is shown below.

Stabat Mater is a 2008 piece by Welsh composer Karl Jenkins, and is based on the 13th century Roman Catholic prayer, the Stabat Mater.  Like much of Jenkins' earlier work, the piece incorporates both traditional Western music (orchestra and choir) with ethnic instruments and vocals - this time focusing on the Middle East. The recording features the Royal Liverpool Philharmonic Orchestra and Chorus, along with two soloists, Lithuanian mezzo-soprano Jurgita Adamonyte, and English musician Belinda Sykes, who both sings and performs on the duduk, an Armenian reed instrument.


Written in the 13th century, the title Stabat Mater is actually an abbreviation of the first line, Stabat Mater dolorosa ('The sorrowful Mother was standing'). The poem reflects on the suffering of Mary, mother of Jesus, at the time of the Crucifixion. Jenkins' setting of the 20-verse poem is actually one of the longest of hundreds of extant settings of the work.

Jenkins' work extends across twelve movements, six of which use texts other than the original poem. They include a choral arrangement of the "Ave verum" Jenkins originally wrote for Bryn Terfel; a movement entitled "And The Mother Did Weep" which comprises a single line sung simultaneously in English, Latin, Greek, Aramaic, and Hebrew; "Lament," written by Jenkins' wife Carol Barratt; and "Incantation," which is partly sung in early Arabic by Belinda Sykes.

Stabat Mater focuses on the suffering of Mary, but unlike earlier adaptations of the text, Jenkins incorporates the language of the period, with lines sung in Aramaic and early Arabic. The addition of Armenian instrument the duduk (or mey) heightens the Eastern atmosphere, and its deep double-reeded sound adds a richer, more resonant dimension to the work than can perhaps be achieved using Orchestra alone. Alongside the duduk, Jenkins features percussion from the Middle East, such as the darabuca, def, doholla, and riq.

Although it was not mentioned in the CD notes or concert programme, the first movement is actually an extended variation of a piece from his Adiemus, Cantus-Song of Tears, using the same format (with soft introduction preceding the main melody) and harmonisation.