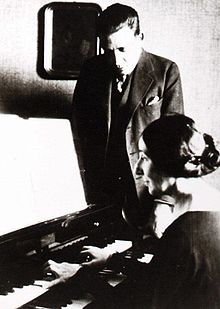 The popular vocal score for Poulenc's Stabat Mater is shown below.

Full of grief the Mother stood
weeping by the Cross
where hung her Son.

The pulsating quaver string accompaniment of the first movement establishes the minor mode and Poulenc's use of woodwind adds to a mood which is sombre and restrained. This understated intensity continues when the basses enter pianissimo with the first line of the prayer, and their theme is taken up by the rest of the voices after a surprise modulation, but still pianissimo. With the sobbing chromatic phrases Juxta crucem and lacrymosa Poulenc not only extends the theme but also introduces one of the work's most important motifs, which recurs in later movements. In Dum pendebat Filius, we see a brief glimpse of the passion that underlies the restraint and dignity of the movement when Poulenc briefly permits a louder dynamic and dissonant harmony for its angular melody. Restraint, however, prevails and the closing moments, which begin with a repetition of Stabat Mater, proceed with all the quiet dignity of a funeral cortège.

Whose spirit, groaning,
saddened and grieving,
a sword has pierced.

A sinister disjointed introduction for lower strings, bassoons and bass clarinet ushers in a frenetic and passionate movement, twice building from a bass entry to emphatic full choral outbursts and concluding with the eerie dissonance and its resolution on the word gladius produced by the altos' semitone rise and fall in an otherwise unchanged chord. Poulenc concludes the movement with an almost flippant final cadence for the orchestra.

O how sad and afflicted
was that blessed Mother
of the Only-begotten!

In a deeply moving contrast, this movement exploits a range of choral sonorities and daring modulations, illuminating its basically a cappella texture by deft touches of orchestration.

The suave and elegant melody, with its slick introduction and frivolous offbeat accompaniment, seems curiously incongruous, almost creating an air of indifference at odds with the gravity of the words. But it is just such an effect that renders Poulenc's setting of the next stanza even more searching and much more powerful.

Who is the man that would not weep
if he saw the Mother of Christ
in such torment?
Who could not sorrow too
to contemplate Christ's Mother
grieving for her Son?
Who? Who?
For the sins of His people
she saw Jesus in torment,
and submitting to the scourge.

This movement returns to an angry and forceful mood with emphatic rhythms and angular melodic outlines. The flow is interrupted by the whispered question, Quis? Quis? but is quickly resumed prestissimo, this time with a new triplet accompaniment, and its insistent questioning continues almost hectoringly, unrelenting to the end of the movement.

She saw her sweet offspring
forlorn in His death
as He yielded up the spirit.

A throbbing string accompaniment with added coloration from horns and harp establish the perfect ambience for the affecting soprano solo, whose falling figure and dotted rhythms are reminiscent of Baroque arias. Answering phrases from the choir Morientem, desolatum recall similar phrases in the first movement. A spine chillingly dissonant effect after the choir's Dum emisit spiritum evokes a brief mood of desolation, heightened by Poulenc's poignant a capella treatment of the final word spiritum.

Ah Mother, fount of love,
to feel the force of grief grant me,
that I may weep with Thee.

Reminiscent of one of Orff's Carmina Burana, the facile melody of this movement with its sparing woodwind accompaniment has a deliciously secular feel about it, which in another context would be totally inappropriate. Once more Poulenc has the foil to this apparent insouciance in the movement that follows.

Grant that my heart
may blaze with the love of Christ,
my God, that I may please Him.

A capella once more, except for the sparest instrumental interludes, the simplicity of this three-part chorus (S.C.T.) re-establishes sobriety and prayerfulness in an extraordinary way.

Holy Mother, grant this same,
fix the wounds of the Crucified
firmly on my heart.
Thy wounded Son,
so gracious to suffer for me,
divide his sufferings with me.
Make me truly to weep with Thee,
to grieve with Thee for the Crucified
as long as I live.
To stand with Thee by the Cross,
and willingly to join with Thee
in mourning Thy loss.
Virgin supreme among virgins,
be not harsh now to me,
make me to weep with Thee.

The basses begin the next movement with the first line of the stanza sung in the manner of a plainsong intonation, accompanied by a simple drone. The reply from the rest of the voices Crucifixi fige plagas is almost predictably forthright and declamatory but the sudden piano and dissonant idiom of Cordi meo valide offer the listener an altogether more touching and intimate response to grief. A return to 3/4 sees the beginning of a section that treats the next 9 lines with steadily increasing intensity, repeated rhythms having a cumulative mantra-like effect. The tension finally resolves into tenderness in the sumptuous melody of Virgo virginum praeclara but stark reality in the final unaccompanied Fac me tecum plangere restores the balance of this complex and deeply affecting movement.

Make me to bear Christ's death,
grant me a share in His Passion,
and to reverence His wounds.
Make me to be wounded with His wounds,
drunk with the Cross
and with love for Thy Son.

The dotted rhythm and minor mode of this sarabande establish a sombre funereal mood, heightened by the use of timpani. The falling intervals of the soprano solo form an impassioned plea set against the frequently static choral writing. The memorable phrase Cruce hac inebriari hints at the paradisi Gloria which is to feature so much in the final movement.

So fired and consumed with flames,
O Virgin, let me be defended by Thee,
in the day of judgment.
O Christ, when I must go hence,
grant through Thy mother
that I come to the crown of victory.

A pulsating quaver beat underpins the exciting opening of this movement whose repetitive rhythmical patterns build climactically before being interrupted by a sudden silence. A dramatic change of mood from fear to longing anticipation brings the movement to a close, but with an unexpected twist, as an idiosyncratic and unexpected fall of a semitone in the soprano part leaves the movement unresolved, in effect a preparation for the final section.

When my body shall die,
grant that my spirit
may be given the glory of Paradise.
Amen.

This final movement resolves all the previous tension of the Stabat Mater in a lovely extended coda in which the promise of Paradise is reiterated, over and over again. Characterised by rocking phrases shared in turn by choir and soloist with Paradisi Gloria as its most important idea, it finally dies away until it is barely audible. A pause for silence sees the return of the theme in an affirmative choral Amen to which Poulenc wryly adds two orchestral chords but with added dissonances, as if to retain the bitter-sweet quality of the work to the very end.